J loves trains, emergency vehicles and cars. So, we planned a trip on a train to a town not far from us (gave me a great excuse to go to Primark). We travelled on a Greater Anglian train (just to add quickly, the train was lovely. It was comfortable and clean. The train was on time and room to store the buggy) 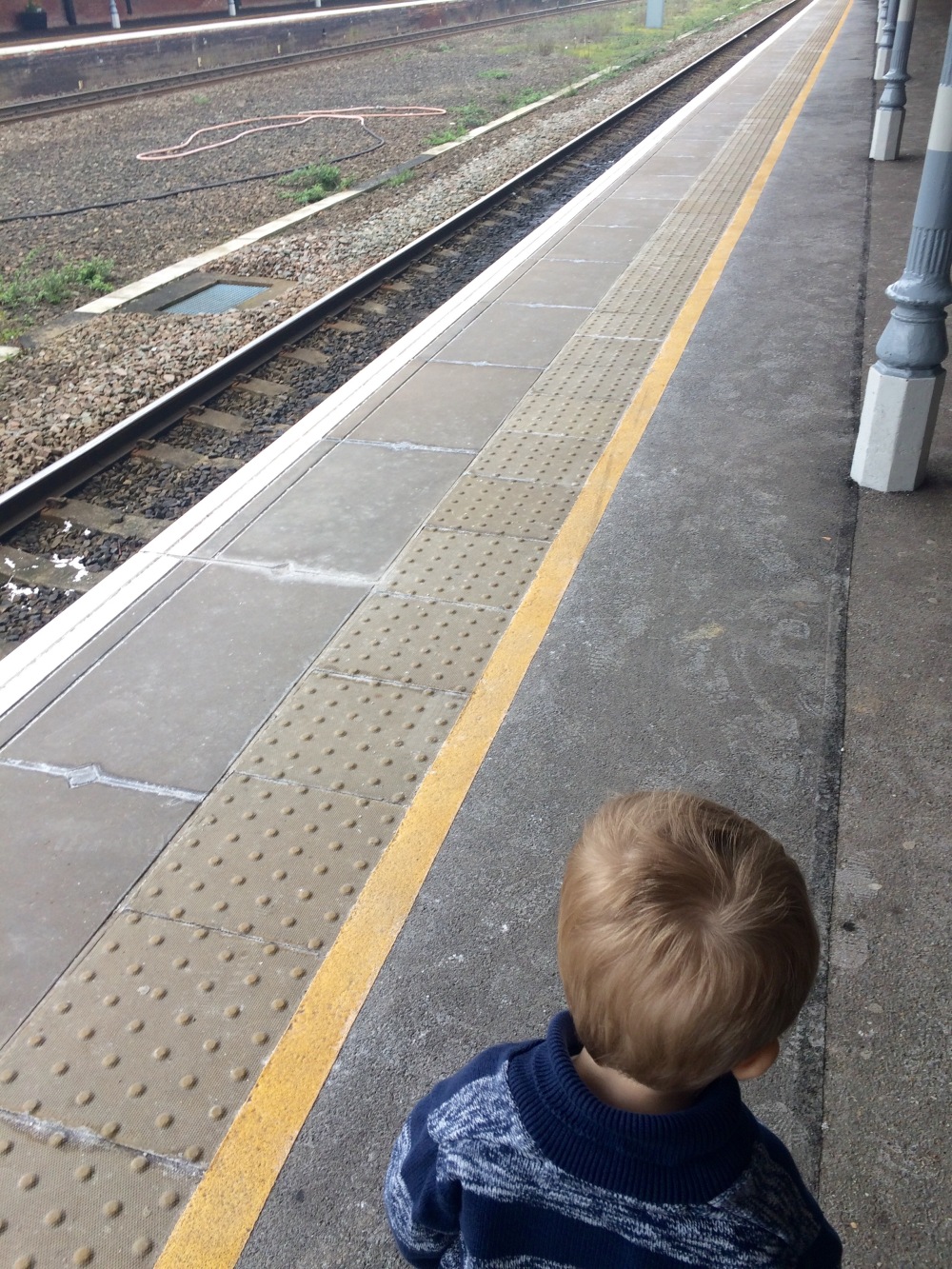 We decided on a Sunday because we knew it would be quieter. We were unsure of how J would reenact to a real train. It’s noisy, fast and bumpy. The added sensory aspect of crowds and extra conversation would have been just too much. So an off peak time just made more sense.

When we got to the train station J was excited to see a train on the other platform. He smiled and watched it drive away. Then our train arrived and again big smiles. Then it came closer, and closer. J’s grip around my neck got tighter and tighter and I did think our faces were going to melt into one face. 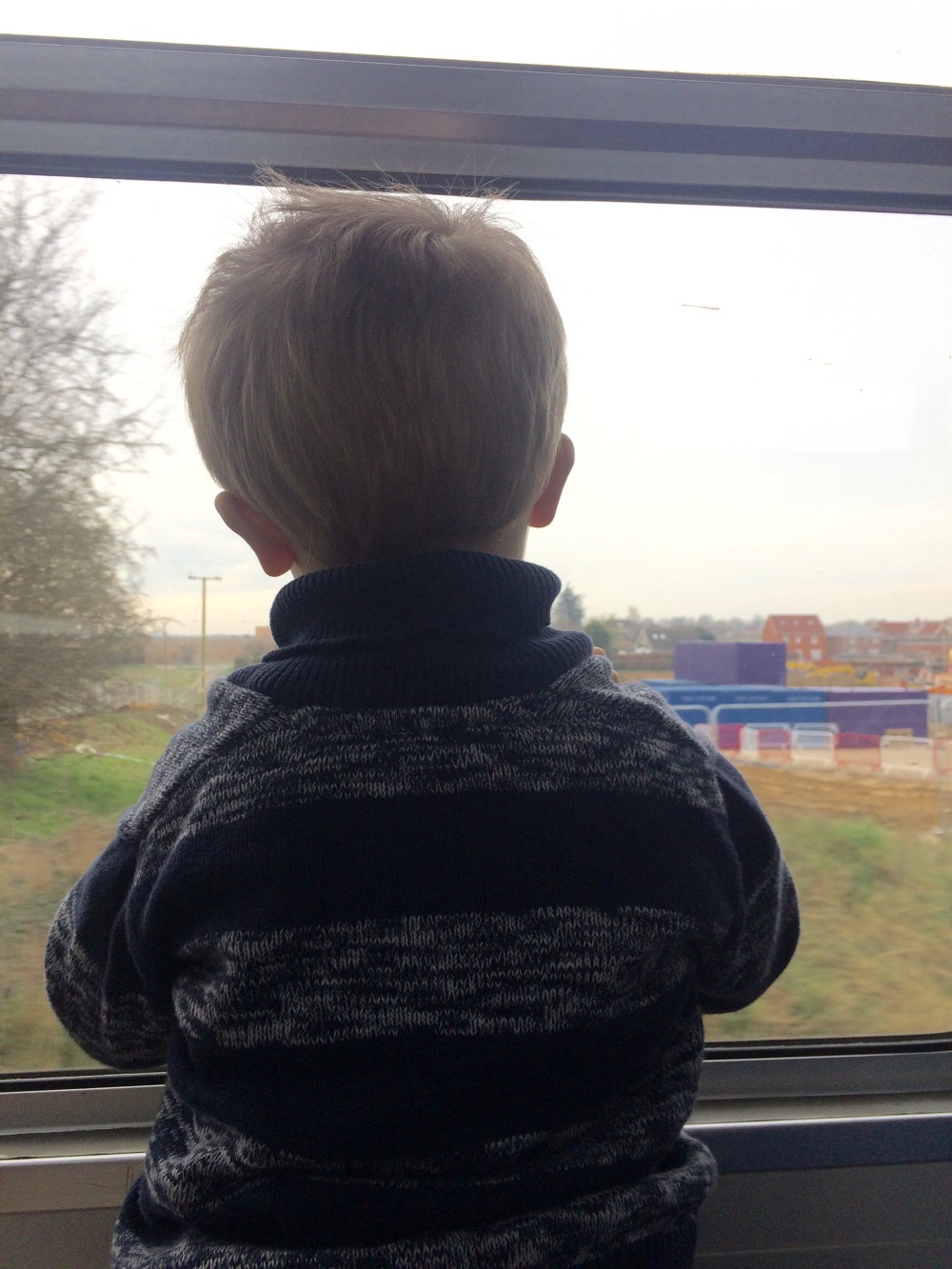 Once on the train J was SUPER excited…flapping, stamping and squealing. He loved the journey. It was long enough that he had fun but short enough that there was no time to be bored. J had fun playing with his little trains and was pushing them around the window and seat. 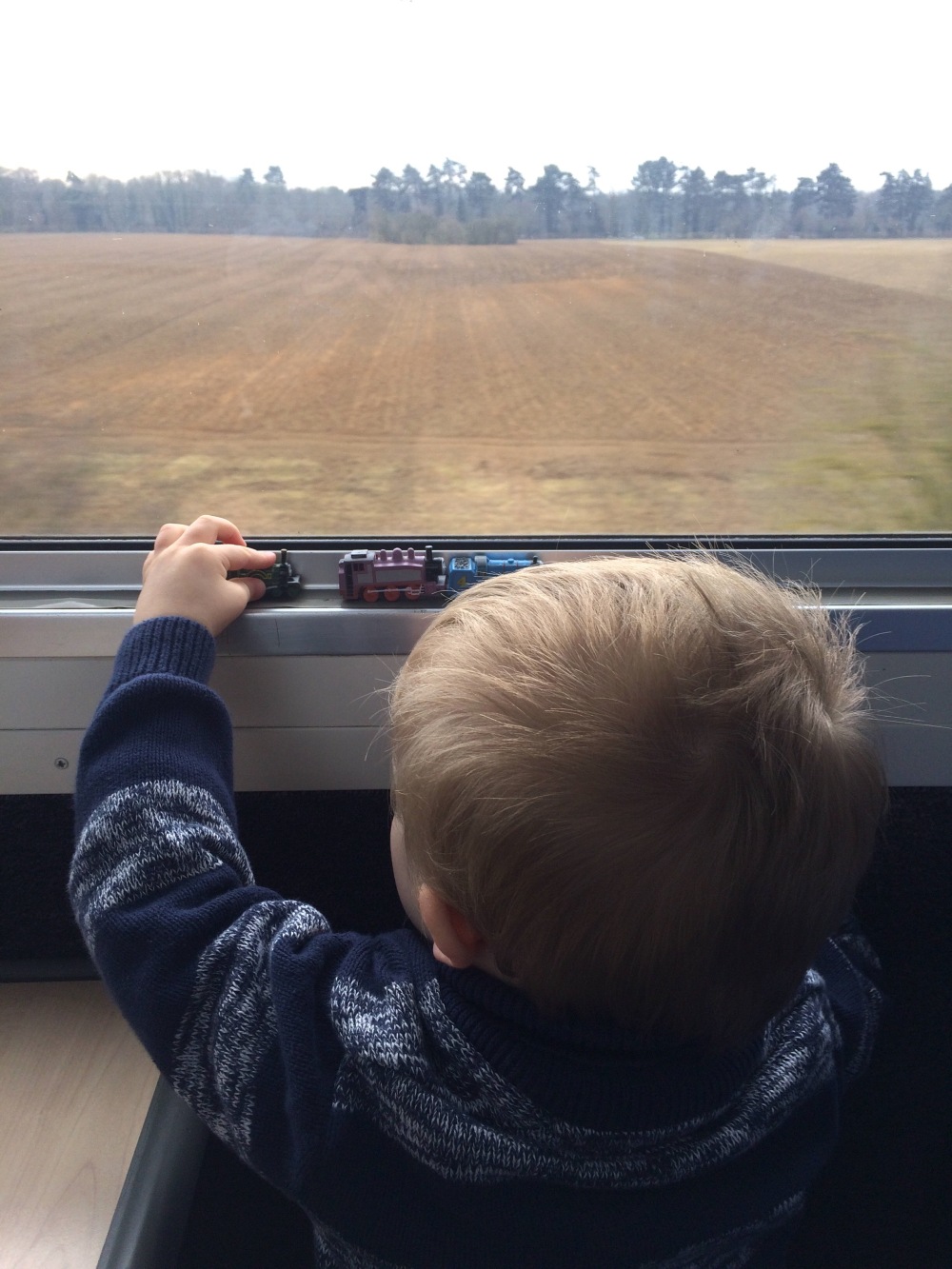 Once at the station we then walked into town and enjoyed our day (we even went to my university building just for nostalgia).

When we told J we were going back to the trains, he had a huge smile! We got to the station early so J had fun watching the other trains and running around the waiting room. He quickly fell into a ‘cycle’ which I had to break as it was becoming obsessional. He would run to the ticket gates and be stroppy that he couldn’t open them, then run out the door to the platforms and be stroppy that I made him hold my hand, then back into waiting area where he could run safely…then back to ticket gates etc etc. Once  J gets into these little cycles there is no breaking it without a full meltdown. So we put him in buggy and went to our platform (he got to go in lift so had buttons to distract him from being taken from waiting area). 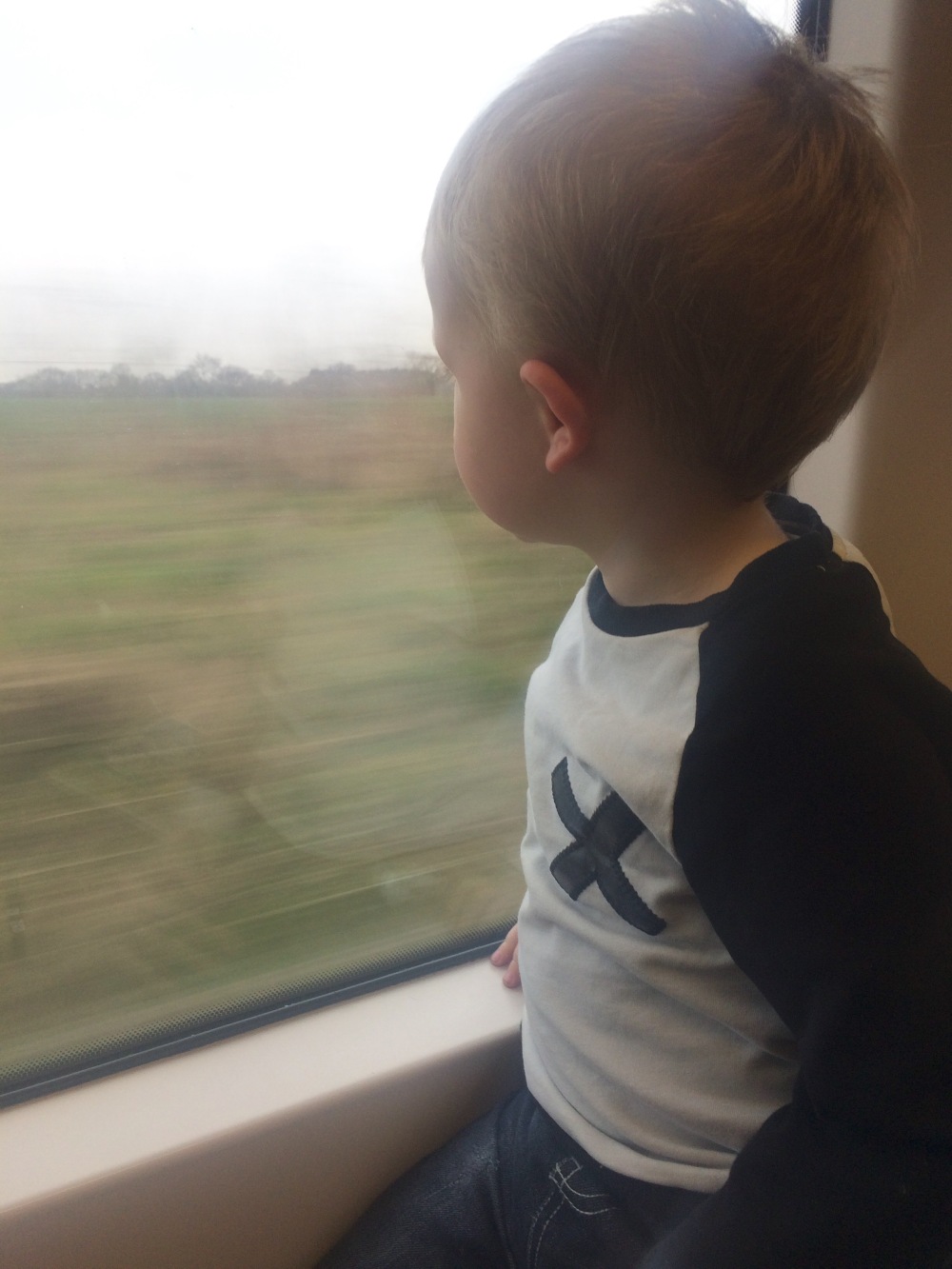 Our train arrived and J eagerly went on board. J was a bit more chilled (due to lack of nap). He was looking at numbers on the seats, noticing armrests and sat on the table to get better view of the trains. 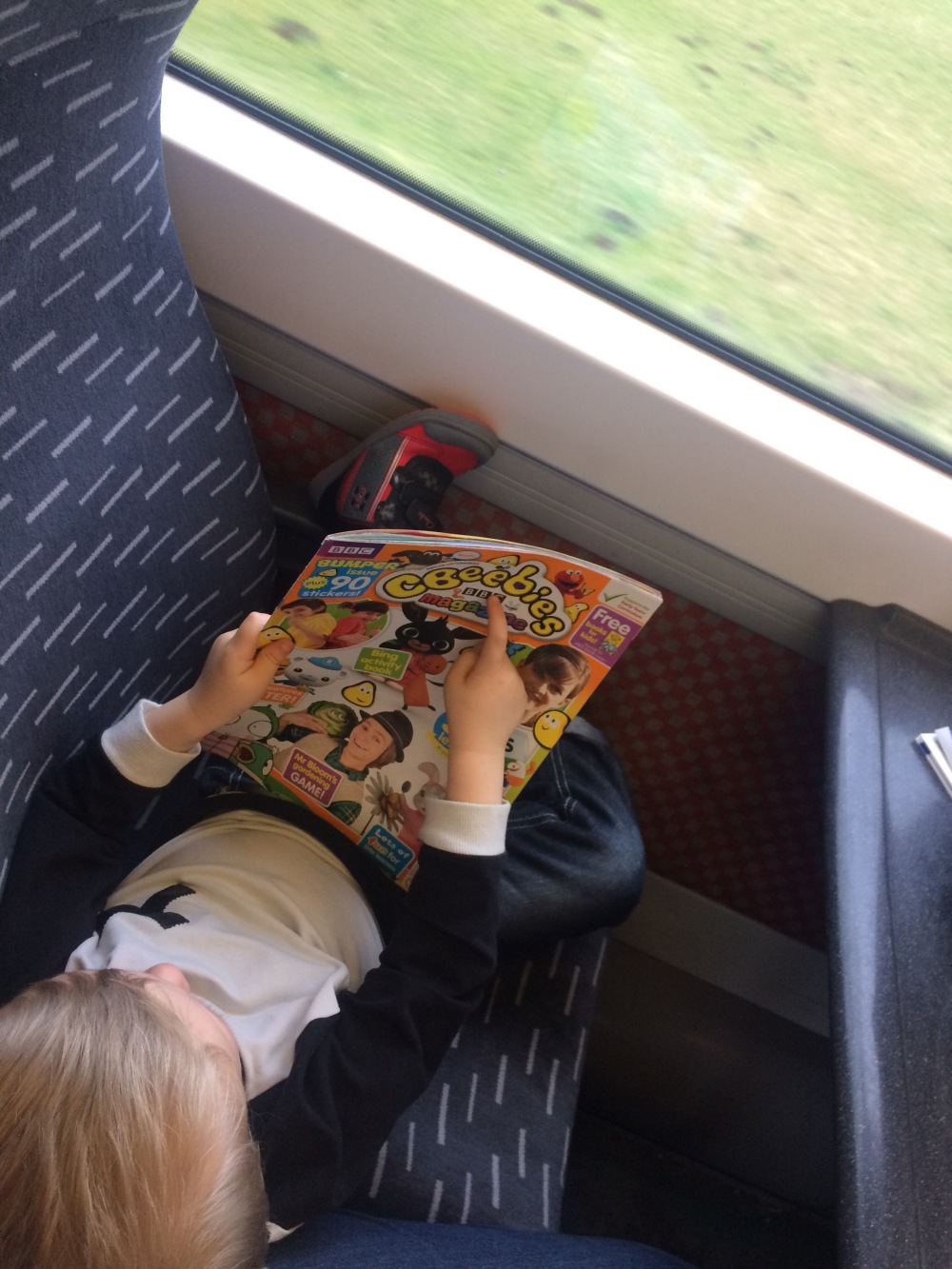 He then relaxed and laid to read his magazine. This showed us just how comfortable and settled he was. It’s definately an adventure we’ll go on again.

We’d like to try the Thomas the Tank Engine experience in Norfolk at some point. Does anyone have any experience of the place and what to expect? Please comment here or on Facebook to let me know 🚂