We have just returned from an amazing 2 day adventure to Alton Towers resort. J is a HUGE fan of Cbeebies and Bing, Te and Mo, In the Night Garden (to name just a few) are much loved friends in our household. With Cbeebies Land being housed by Alton Towers, it was perfect for a family holiday.

We booked the hotel and tickets way in advance as the summer holidays is a busy time. Usually we would choose term time but we went as a whole family including my school age niece. 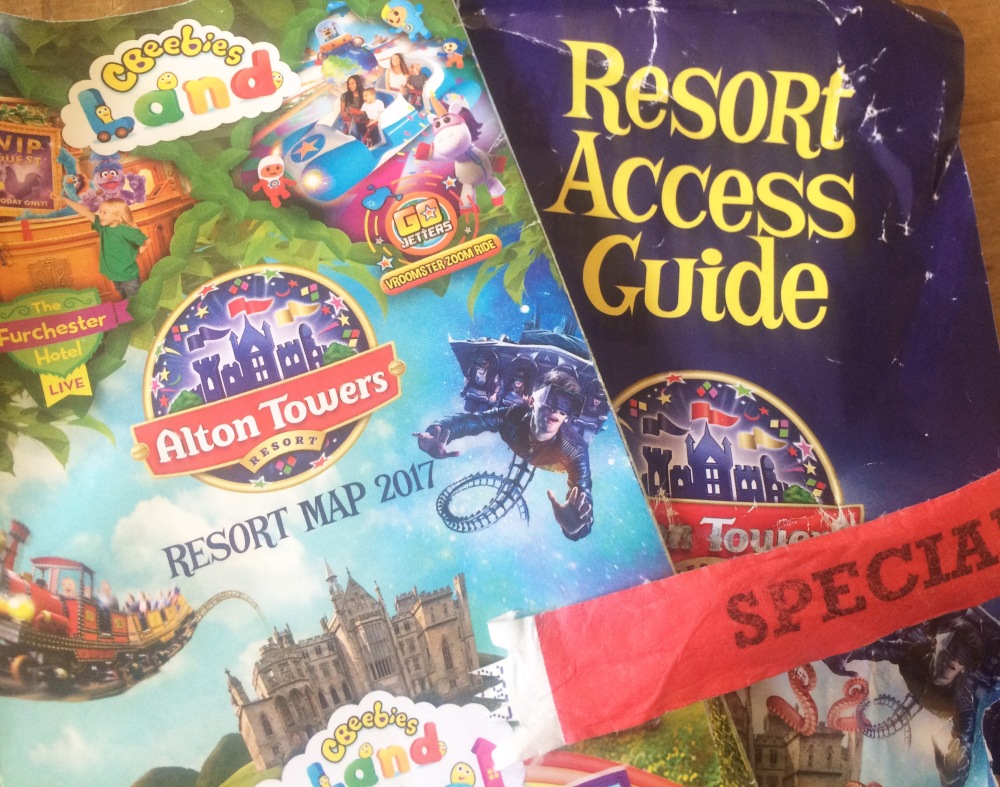 I also arranged for a ‘special access’ wristband. This is for those with additional needs which mean that waiting in line is just not appropriate. There is also a special carers wrist band too. This means that you can queue in a separate and much shorter line. You are helped to get in rides if needed.

They are strict with these bands (and rightly so) and you have to prove the need for one by supplying paperwork such a reports, DLA letters or cover note from GP/pediatrician. You also need to take photo ID so we took J’s passport. We stayed for 2 days but only needed to show the documents once as he was then noted down on their system.

The day before we went, I wanted to prepare J. Cbeebies Land has so many potential ‘meltdowns’ and sensory issues so I wanted to prepare J. I showed him videos off YouTube which had the different rides, the music and sounds he’d hear, the business and people that would be around. To say that J was excited is an understatement. We heard ‘-beebie-Land’ repeatedly the rest of the day and the whole journey there.

J literally ran to Cbeebies Land. He had a huge smile on his face and it was amazing to watch him being so free. We went straight to Postman Pats ride. We queued in the disabled access area and were let on within a couple of minutes. I feel for those in the queue who had to heard J’s ‘my turn, my turn’ on repeat for those minutes. Where we queued was very ‘open’ so J didn’t have the crowding around him, which helped keep a level of calm. 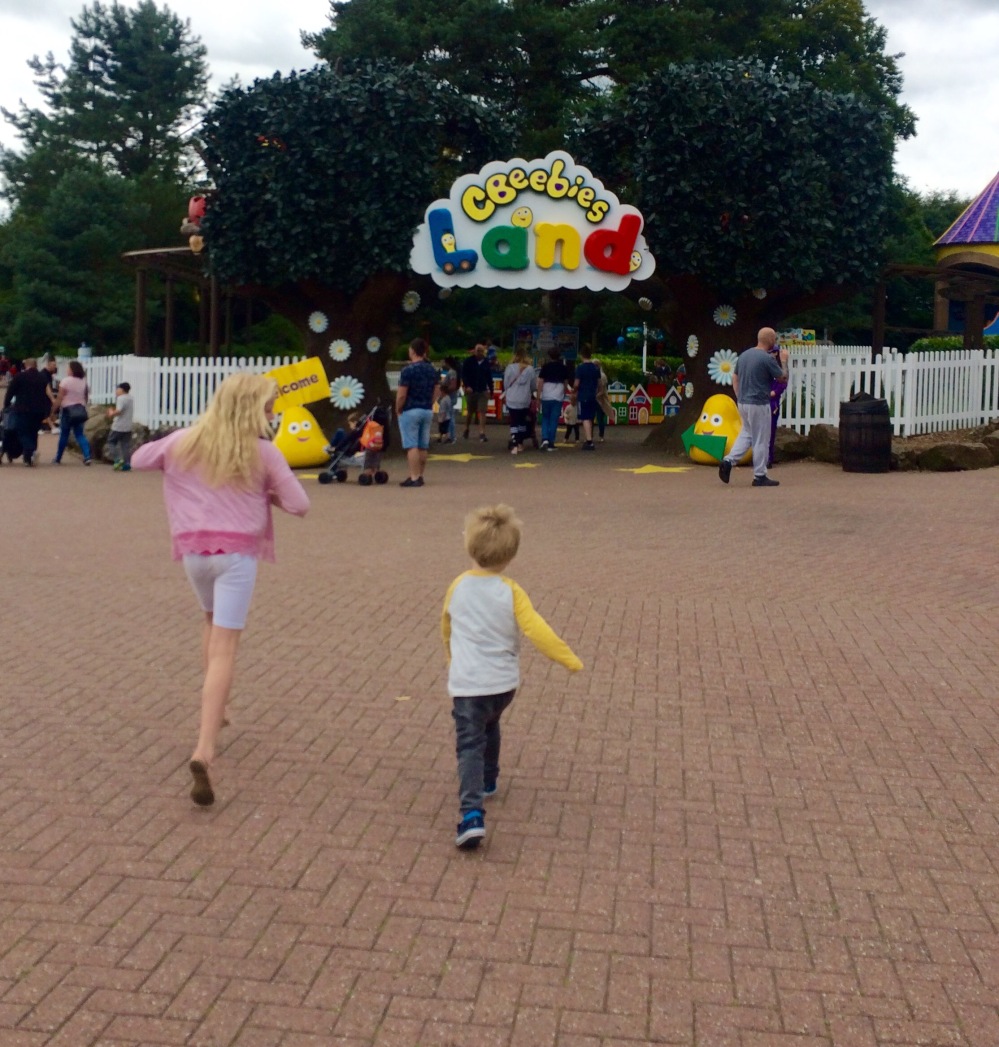 We spent the first day exploring the rides. I think Octonauts and Go Jetters were favourites of J as he loves things that ‘spin’ and move fasts. It’s part of his sensory seeking and I think he would have rode them repeatedly all day if given the chance.

Sadly J wouldn’t go near the ‘live action’ things like Mr Bloom. I think they were a bit ‘full on’ and interactive for J. He didn’t like the people talking to him. But he did love Hey Duggee show (on my knee and from the safety of my arm which acted as a hiding place for him to peek out of). The difference here was that you watched and only joined in if asked on stage…they didn’t come over to J so he was much more settled. We even had to watch it again the next day! 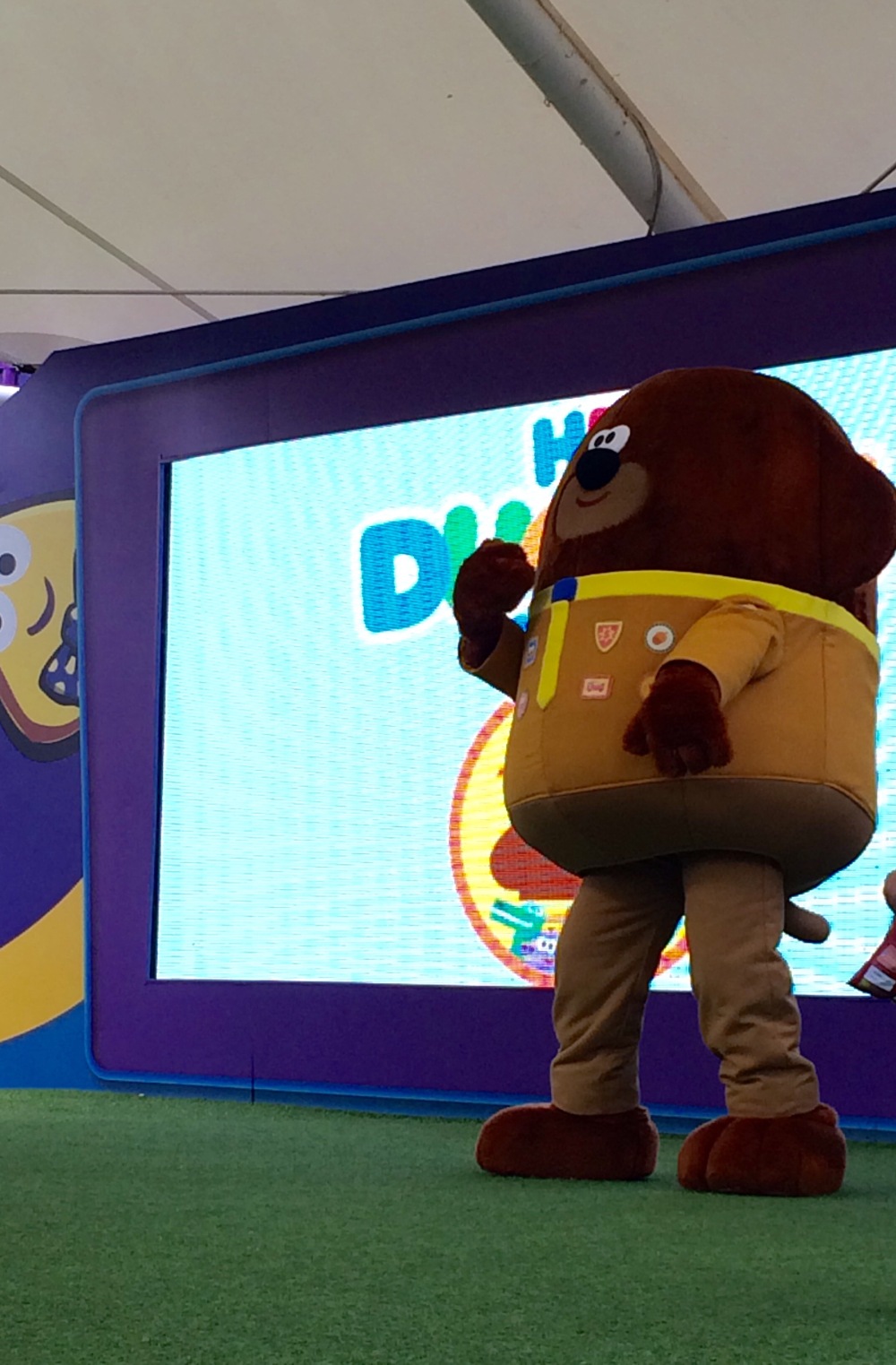 The only thing that disappointment me was that you could often see the mechanics of the characters. For example on the In the Night Garden boat ride you could clearly see the metal bar moving the Tombliboos, an electrical box (I think) behind Upsy Daisy’s bed etc. These could surely be hidden better by Alton Towers ‘magic’. But it didn’t stop J from being enthralled. 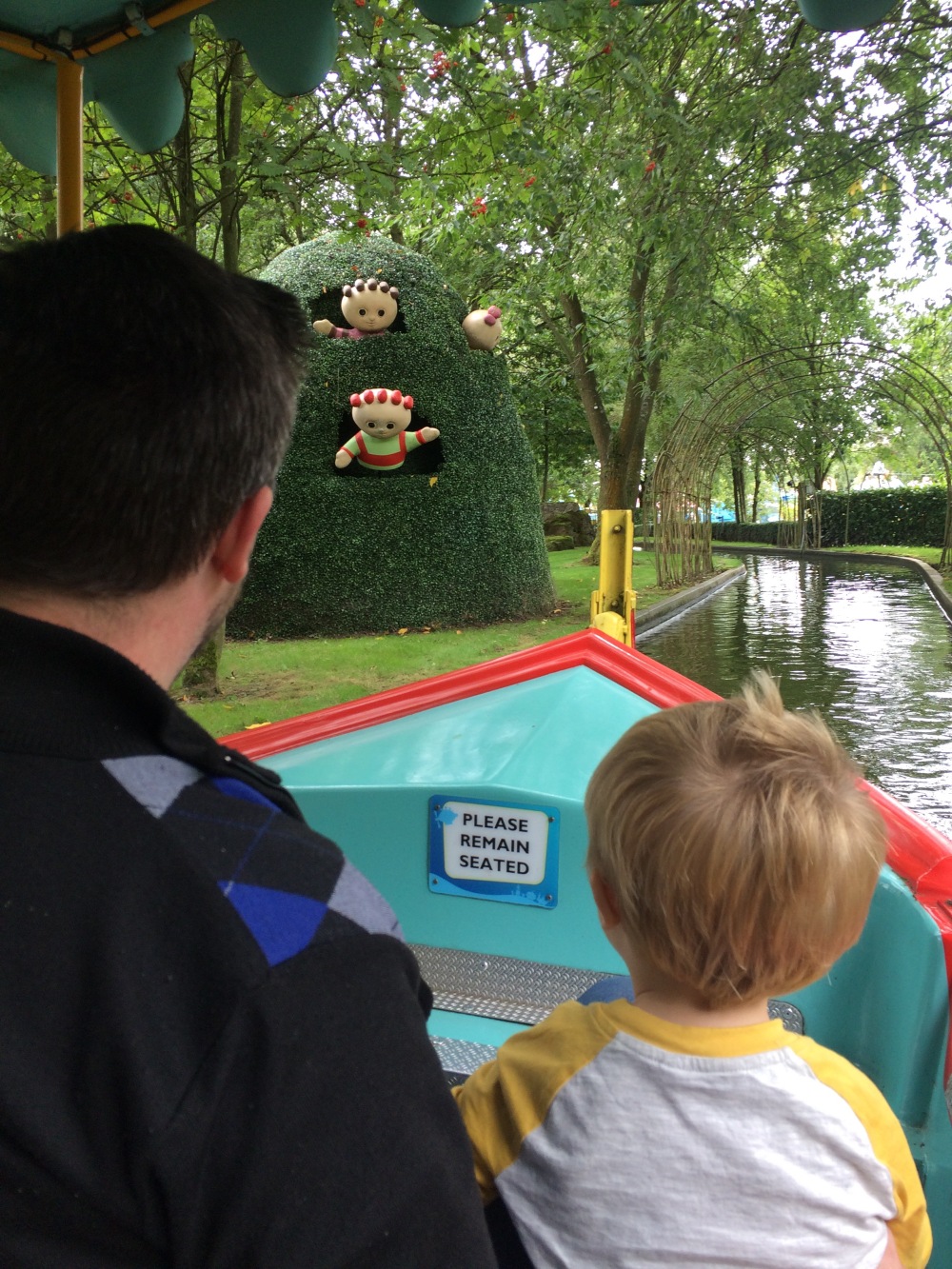 Toilet facilities in Cbeebies Land were great. They were clean, accessible and plenty of them. They have disabled access and changing facilities.

I am so happy that they including Something Special into Cbeebies Land. Mr Tumble has always been a special person for J. He helped J with his Makaton signing and showed J that we weren’t the only people to use this to communicate. It opened up his world. He loved the Something Special garden. There’s sensory plants, different textures to feel, sound and visual explorations AND Mr Tumbles spotty bag! 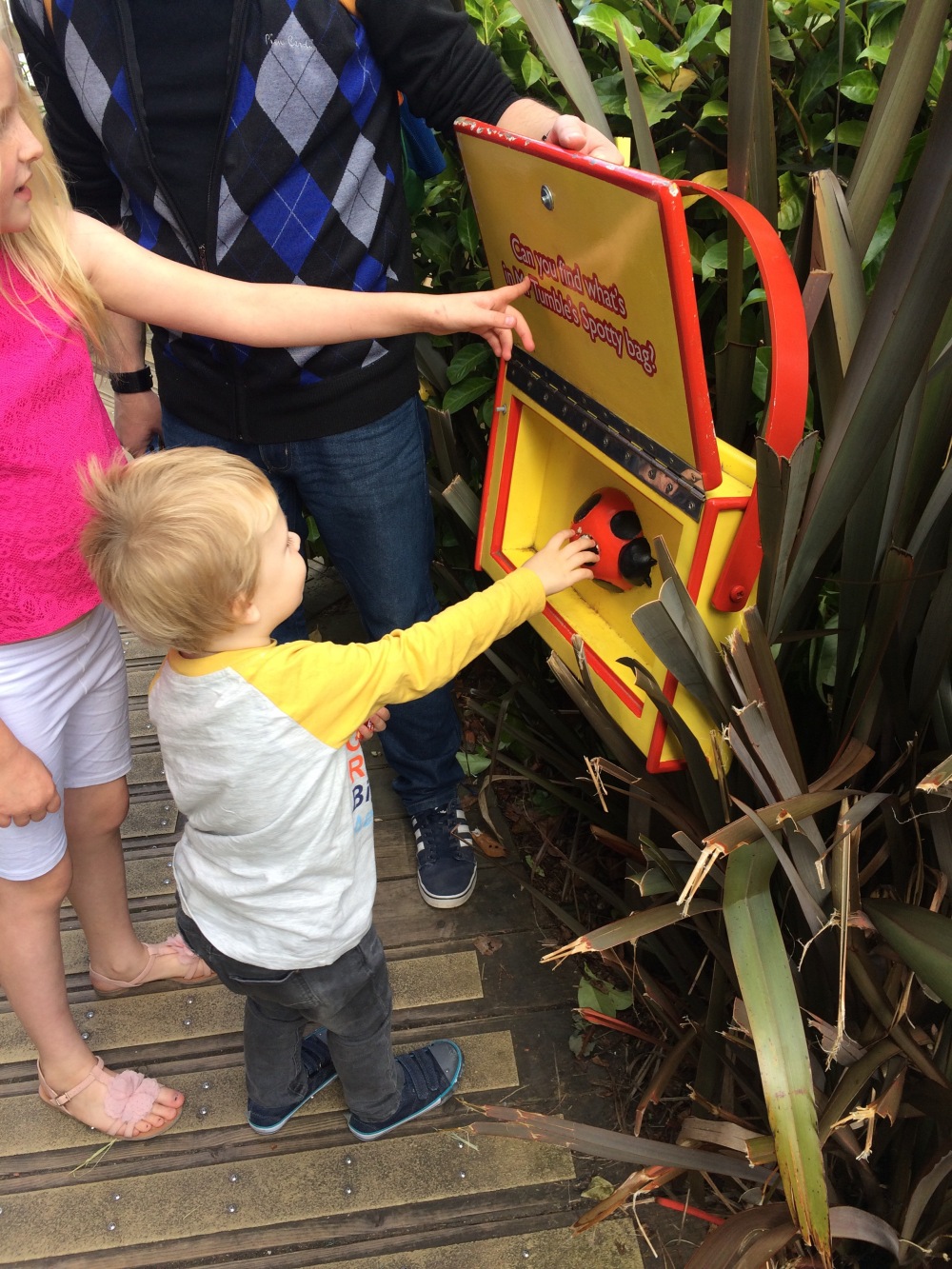 J was surprisingly quick to find the ‘3 special things’. At the end J got himself into a bit of a loop. He does this when things are either too overwhelming (either over excited or over stimulating). In this case I think it was excitement over being in Mr Tumbles garden combined with a 6am start to the day. His loop was to press the button and listen to Justin saying ‘butterfly’, run to the butterfly and run back to Justin to tell him he ‘found it’ (repeated over and over). 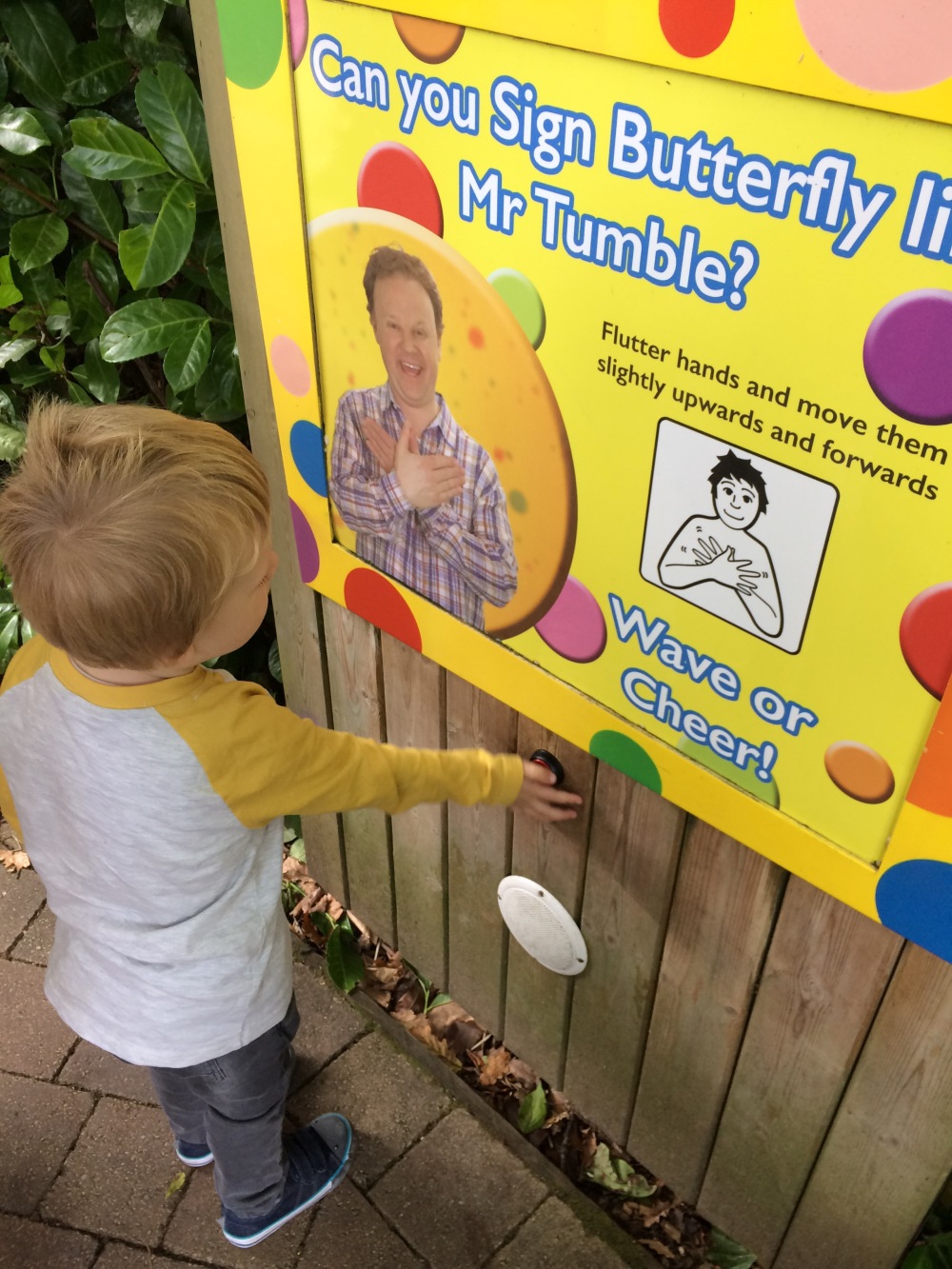 My warning for this activity is to avoid if your child can’t handle busy and crowded areas. Also, avoid if your child doesn’t like loud and repetitive sounds. This is a ball game based area. You have to collect balls and shoot them out of the air cannons into the pie maker (or at each other). 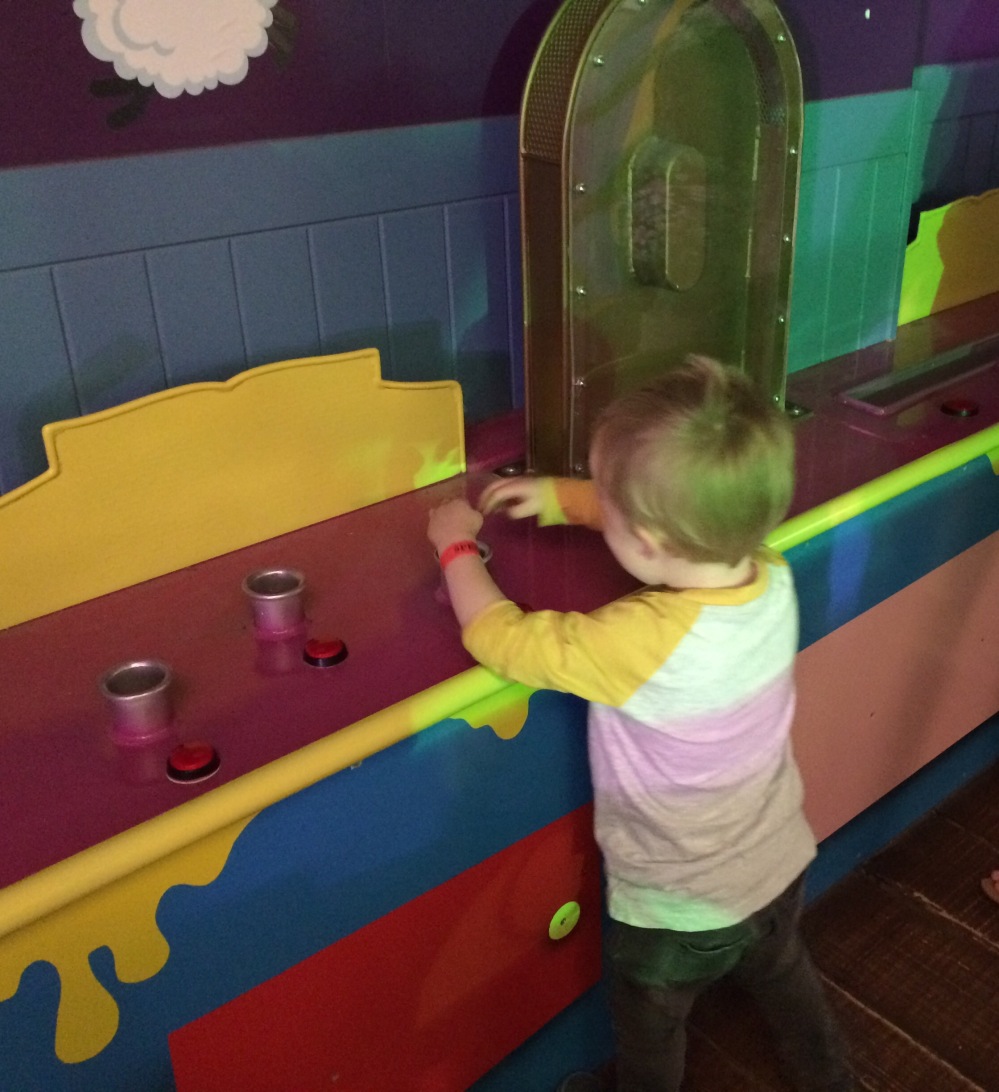 J did NOT like the sounds of all the air machines and instantly freaked out and held hands over his ears. Luckily I found a tube slide so we took shelter in their to acclimitise. We also found the quieter areas where J could explore the buttons rather than join in the actual activity (mind you, most of the children were just shooting each other).

I have to say that it was really 50:50. Some staff were really friendly (one of the guys operating the Driving School learnt the sign ‘help’ for J) and others looked like they really didn’t want to be there. J always says thank you and some operators didn’t even acknowledge him. But sad considering Cbeebies Land is a magical place for kiddies. A little more enthusiasm would be nice.

I can’t fault the Alton Towers hotel. It was beautiful. We stayed in the adventure themed hotel. We parked the car in their car park and left bags in the car so we could get straight into Alton Towers. We then checked in later. 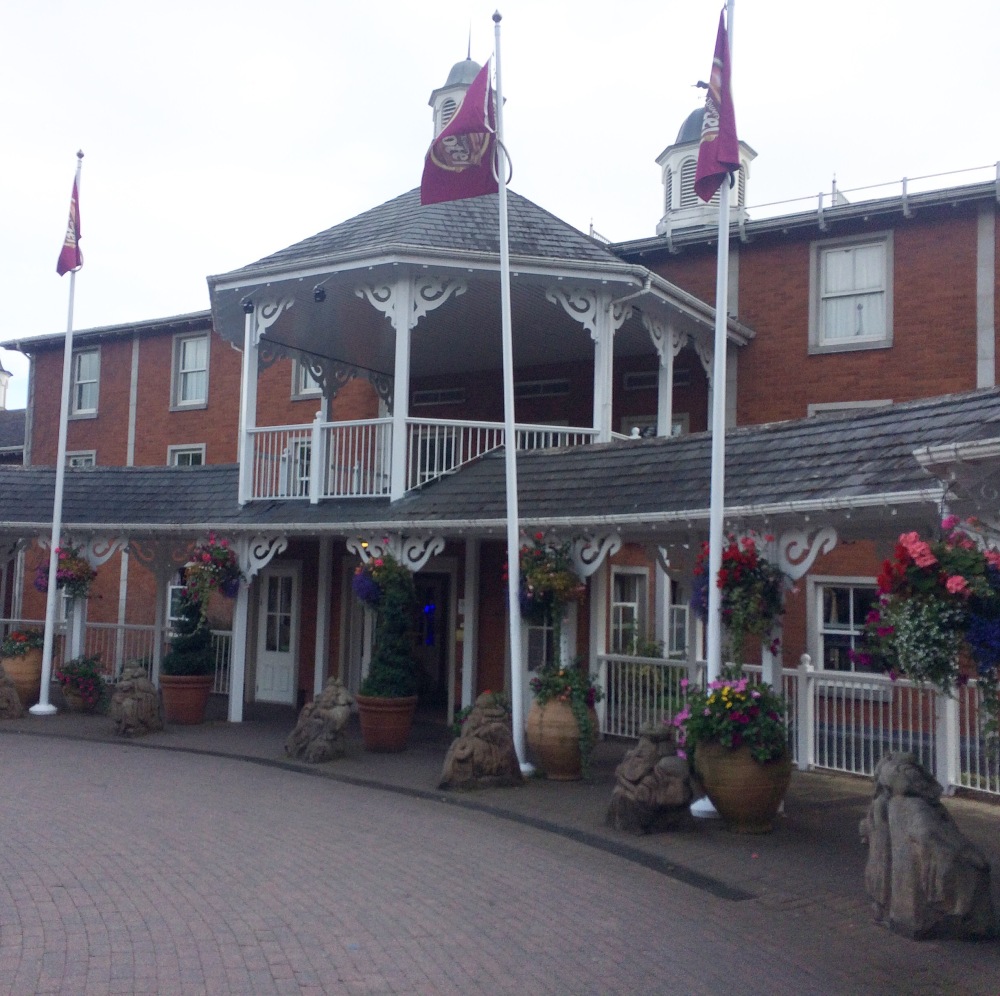 The room was amazing. It was beautifully decorated to make you think you on an adventure. All the fixtures are attached to the walls which is a great help when you have a child who loves to work out mechanisms…he soon figured he couldn’t pick them up and manipulate them. The Tv has a good range a channels so J could be distracted by cbeebies whilst we sorted out bags. 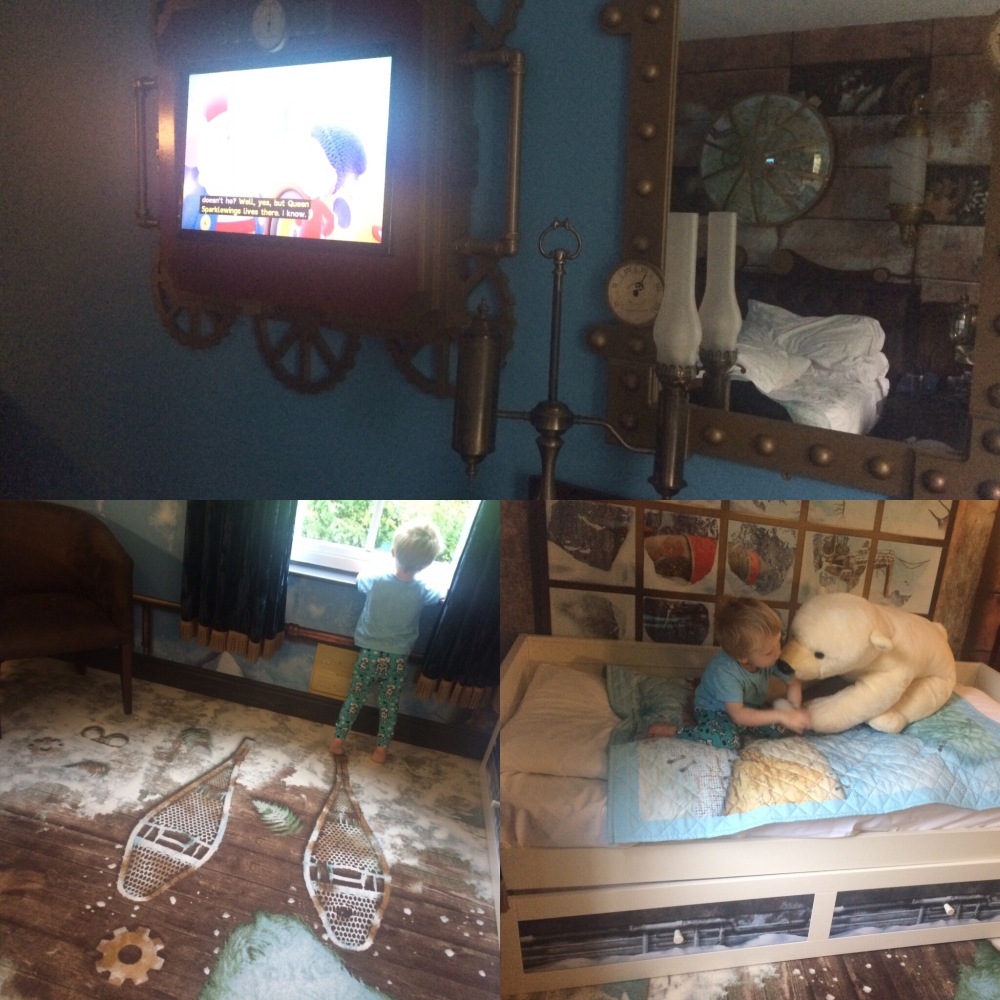 We moved J into the lower bed (you can pull the bed out from the bottom) as there were no bed guards. He was very comfortable and enjoyed cuddling the giant polar bear.

We went for an evening meal. I would add that the restaurants get booked up fast so reserve days in advance. This really could do with being a bit clearer when booking the hotel. We went to the all you can eat buffet.

You may need to remortgage your home to afford it but the food was tasty and a good selection. I personally don’t feel it warranted such a high cost but we were tired and hungry. 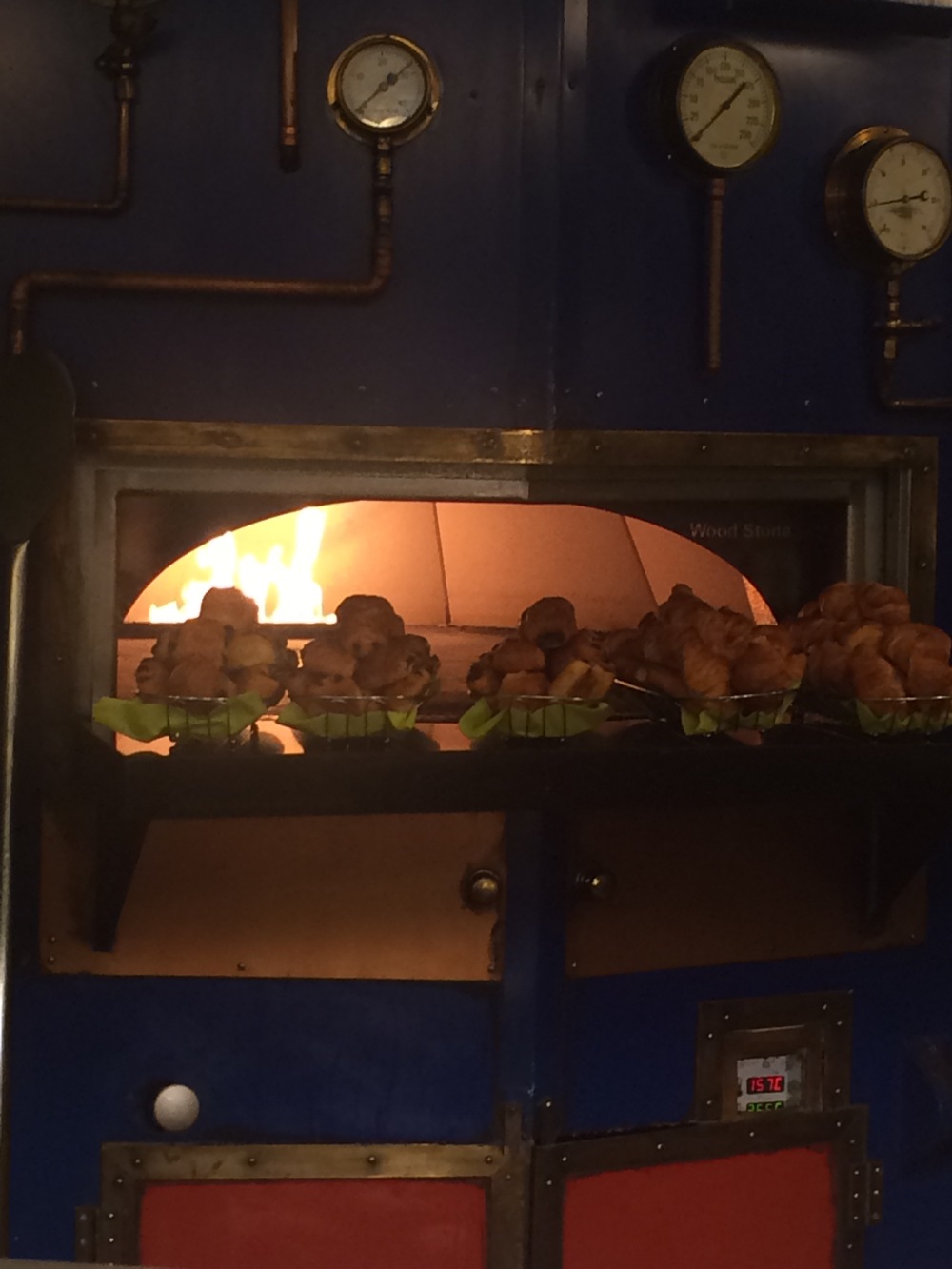 We had breakfast in the Atrium where you could easily forget you’re in rainy England. Breakfast was a buffet and a good selection of cooked, pastry, fruit, cereal etc. J had a bite of toast and bite of apple…he was over excited by having whole family there and the sights and sounds around him so he wouldn’t sit and eat.

I had brought snacks for J to eat in the park as it was much cheaper and stuff I knew he’d eat. That meant he could eat little and often which helped as he was just as excitable on day 2.

We also explored the main park. My parents had J whilst hubby and I went on rides (‘Thirteen’ is a must). We also went on family rides such as the River Rapids. I downloaded the Alton Towers app which tells you the waiting times for rides. This was really helpful as we could plan what to go on and when.

We all had an amazing couple of days and have great memories (and photos) to treasure. J woke up this morning asking to go back…we will definately be visiting again next year.

Where next? Have you got any recommmendations for places to visit as a family in the U.K? Let me know in the comments or on Facebook, Twitter or Instagram 🎢