We were watching Cbeebies the other day when Something Special came on the Tv. Lots of TV shows have come and gone as J’s favourites over the last 3 years (ish-he hasn’t been watching Tv since birth obviously). Paw Patrol has now died down, PJ Masks don’t bother him anymore and Thomas the Tank Engine is just in the background.

But there’s something about Cbeebies and specifically Something Special that J just loves. As soon as Justin or Mr T comes on the TV J smiles like he’s seen an old friend. I think it’s all to do with the Makaton. We have used Makaton since J was a baby. I have always loved signing and believe it helps all child to focus on key words and have a way to communicate.

Then J began to need Makaton. His speech just wasn’t coming along. His whole communication was delayed. At this stage we didn’t know it was due to Autism (although I had an inkling). J’s first sign was ‘more’ and then ‘please/thank you/ta’. After these were food and drink signs, followed by car and help. Others quickly followed.

I think the reason J likes to watch Something Special is because he sees them signing. For J this meant someone else was using his ‘language’. It was familiar and he understood it. J was not alone in his signing. 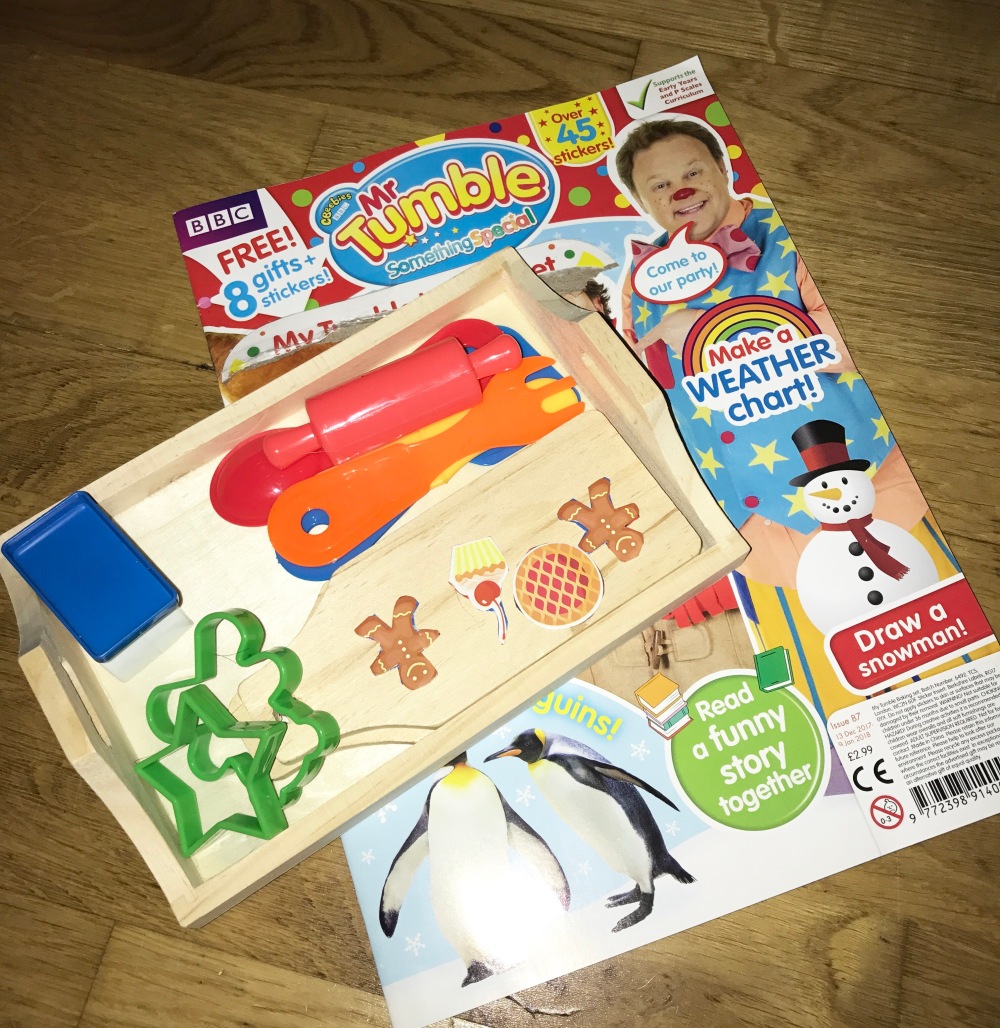 We soon started to buy the Something Special magazine. For J it meant he could have more Mr Tumble and more signing. For us as parents it meant we could learn new signs (and they are often based on the season or celebrations coming up so was very handy). I found myself cutting out signs and posters to keep and use as and when we needed them.

In this month issue we cut out and added Velcro to the Weather Chart so I could put it near the front door. We look at the weather and J decides which to put up. It helps J to know what he needs to wear…J would happily just leave the house with no shoes on in all weather.

The free toy helps. J is just like every other child and is instantly attracted to the free toys on magazines. However some of them I know will be thrown away within an hour. Mr T never disappoints and we end up keeping everything and using it regularly. We still have the Mr T soft toy, the instruments, the pretend Tumble Tap. Sometimes the activities help me to get him to do his speech games, or his play therapy activities such as extending his pretend play. 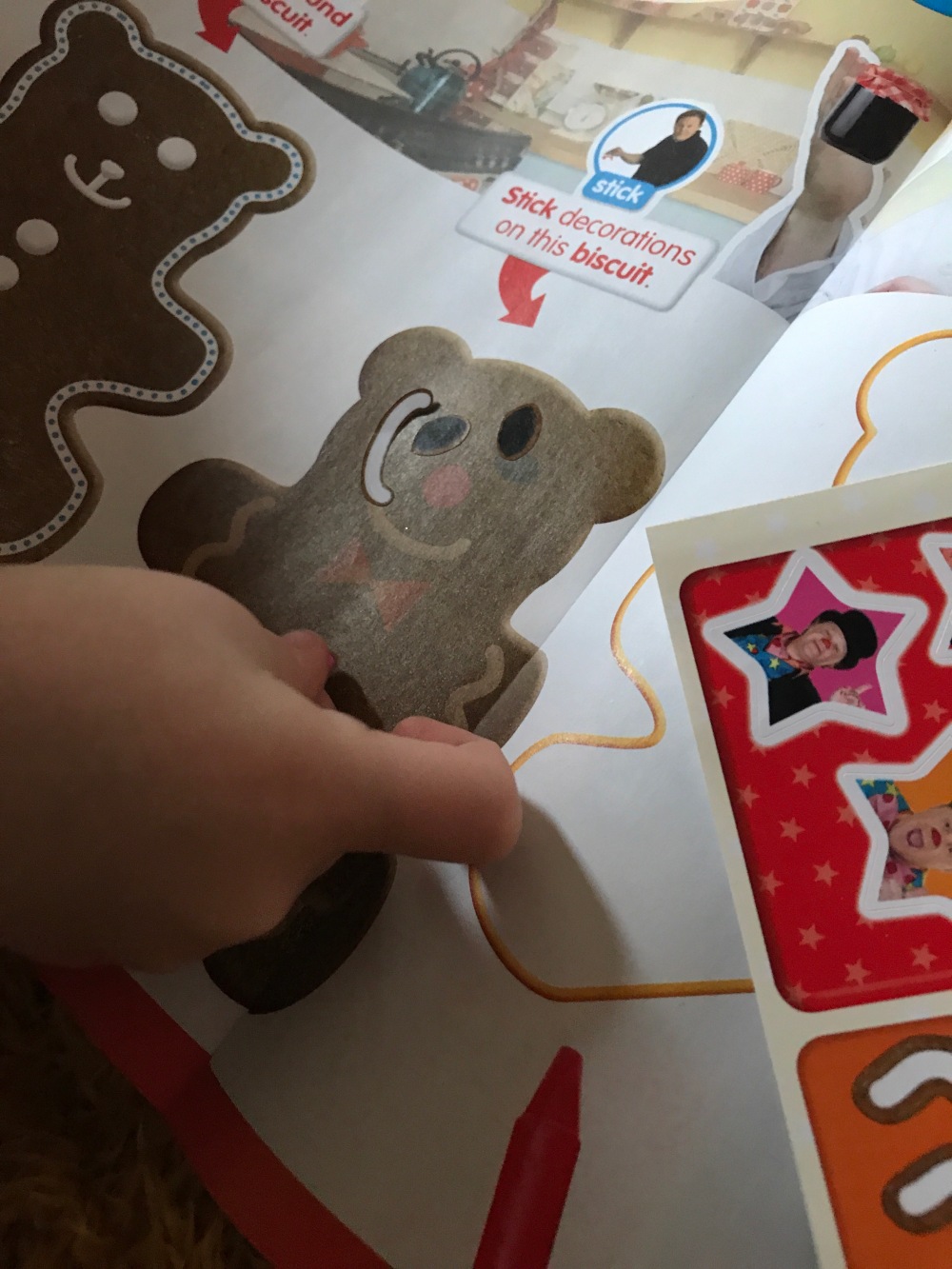 There’s also stickers and colouring in pages. J likes me to find the right page for the stickers and together we do the activities. They are all linked to the EYFS (early years learning outcomes) and P-Scale (additional needs learning outcomes). We talk about numbers and the signs on the page. But it also helps J with his fine manipulative skills as he has to pinch and place the stickers. Any left over stickers usually end up on me, J or the coffee table!

J doesn’t rely on Makaton as much anymore. He has found his voice. However there are times he doesn’t know the word, or isn’t clear enough to be understand. He can use his Makaton to tell us what he wants and as most signs are based on ‘real life’ actions so others tend to understand him too (e.g.: sign for drink is the action of drinking). I still use Makaton to reinforce instructions, or to ask him something when we’re somewhere noisy or distracting. He’s always been better with visuals than hearing/listening to things.

So Mr T and Justin are long term friends of J’s and very important to him. I don’t think Something Special will be something we ‘outgrow’ for a long, long time. So Justin Fletcher and the Something Special crew…thank you ❤️

What does your child think to Something Special? Do they enjoy using Makaton? Or is there another programme that has special meaning? As always, let me know onFacebook, Twitter or Instagram