Visual communication is a great way to engage children who have difficulty with a range of scenarios. This may be listening skills, understanding, regulating emotions/behaviour and those who have not yet learnt to/are not able to read. In our family having visual communications has been a huge support with the issues caused by J’s diagnosis of Autism. 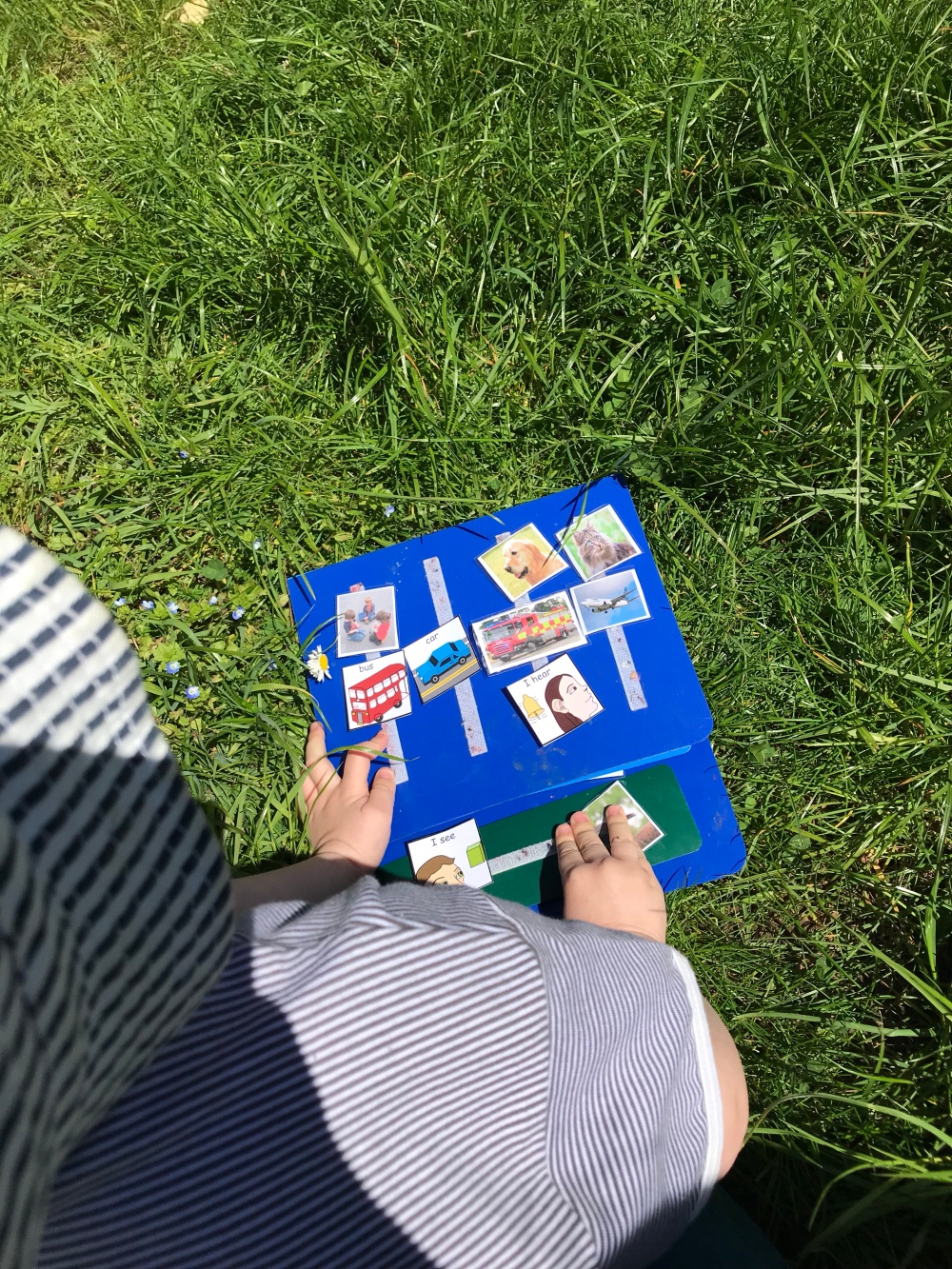 There are different ways to set up and use visuals however we use two main forms. The first being Picture Exchange Communication System (PECS). This is where the child is expected to choose the symbol/picture or create a sentence depending on the stage of the the child, of what they need/want and to give this to the adult as a way to communicate. I have written numerous times on our experiences with J’s PECS book. We used it initially when J didn’t have a voice, and was unable to tell us what he wanted/needed. As J became more confident and his speech developed we moved up towards stages 5/6 and PECs is now used to enable J to build on social communication such as maintaining conversations and answering questions from others. It helps him to structure his sentences so they are understandable to others and to support him to direct his speech at another person rather than himself or thin air, as he often does. 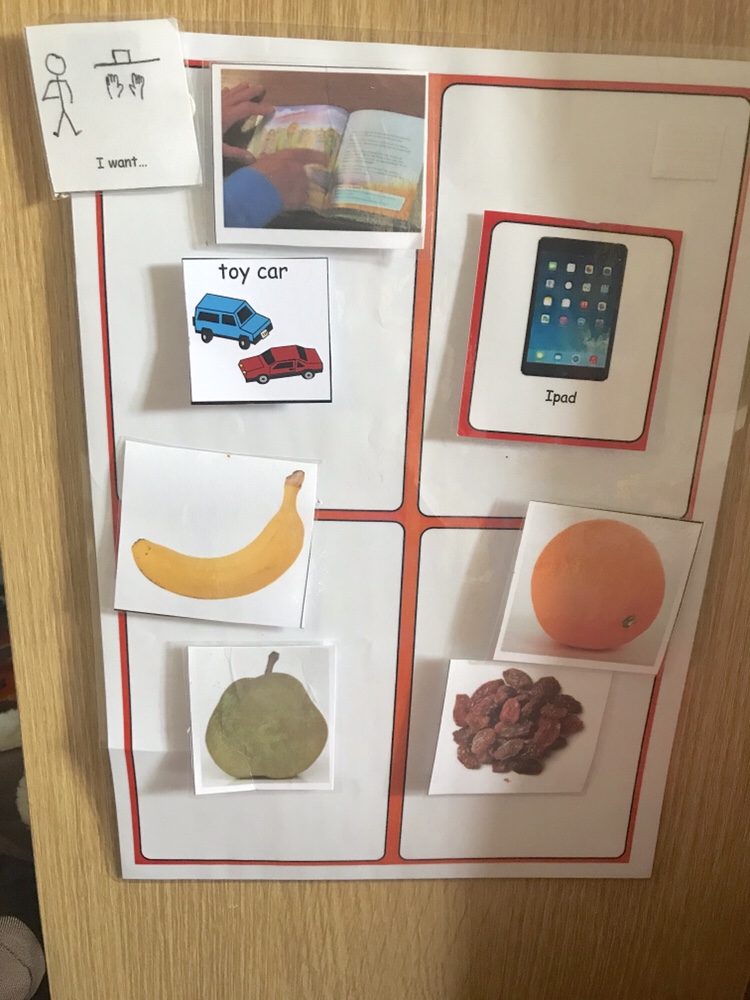 There is also a choices board. J’s PECS book is full of symbols and sentences starters. However, often it is helpful to have a more specific board for different situations. We have choices boards at home for ‘free choice’ activities. This is used when J is in need of distraction or where a resources/toy is not within his reach as it reminds him there are more toys than just the ones readily available. Similar to the PECS book he must choose what he wants and give the symbol to me, and now he is more verbal, must tell me.

I have also created choices board for food options, TV shows/movies, places to go. I have a whole range of symbols and photos. I recommend making a list of all the words your child may want to use so you can prepare. I use a mixture of home made, PECS UK, and Twinkl resources.

The second way to use visuals is as a way to give children a way to visually see an instruction or request. For some children listening to instructions is not easy due to the many sensory distractions around them, or maybe a delay in understanding of language. We have multiple visual timetables and sequence boards. I also have a visual ruleboard which is insanely helpful when J loses the ability to listen and focus when in a meltdown or tantrum (he is 3 after all, not all his outbursts are autism based).

At home I try to keep it short. I stick to 3 steps at a time. This means that if plans change later in the day then it is not upsetting for J. I show him the symbols and talk about what is happening eg: if someone is coming I talk about why they are coming. 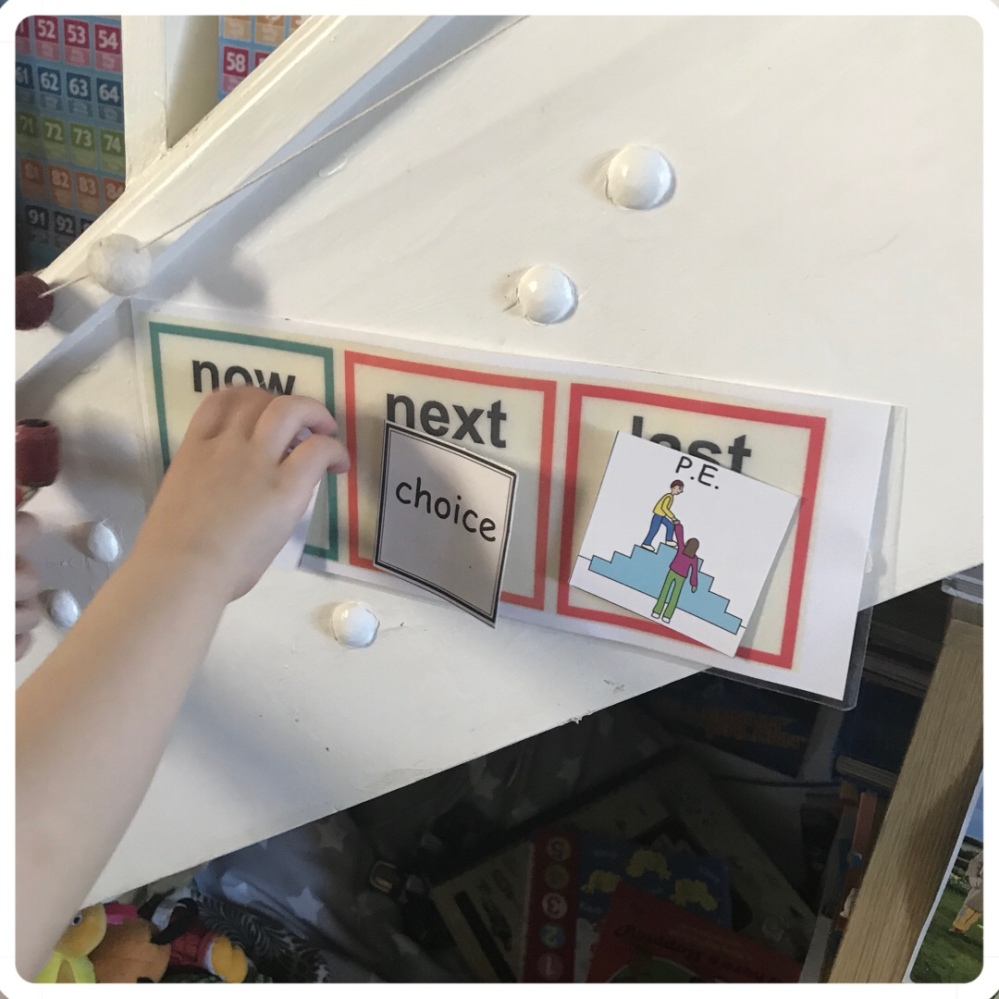 Here is this mornings visual timetable. First we had breakfast, then J had free choice of what to play and after this is we go to gymnastics (Tumble Tots). J doesn’t require his timetable to be broken down further than this, however others may benefit from more steps eg: ‘get dressed’.

I also have a ‘travel timetable’. It is small and easily fits in J’s bag so it can come with us everywhere. Each night when J goes to bed, I set up the visuals needed for the next day. This means that when we are out the house I can reinforce what is happening, where we are going. I can also extend on the rest of the day. It’s incredibly helpful for when we are out and J is struggling to wait, or is having sensory issues or is upset. I can show him what we are doing now, and what is going to happen. Or how long he has to wait till we get to wherever it is he’s wanting to go to or to do. As you can see it is homemade but as its starting to get a bit ‘used’ I am going to look into buying a more sturdy travel system.

There is also a visual timetable at J’s nursery. There are more transitions there as he is expected to go over to snack time, lunch time, outdoor play etc. By having the timetable infront of him where he can see it means he knows what to expect, and when. This gives him security and lessens the anxiety of the ‘unknown’. It is difficult to process spontaneity when on the autistic spectrum.

I have used the sequence board for two main situations. The first is when we were toilet training. We had a sequence that showed how to use the toilet. Starting from pulling down pants and ending with washing hands. For J transitioning can be difficult, especially if it’s not on his terms or is something new. You wouldn’t think that toileting would have so many actions and that moving on and off a toilet can class as transitioning but to many children it can be difficult for them. J quickly learnt the routine and soon was independent in toileting. Now the only issue we have is public toilets as he get anxious over sounds, overwhelmed when there’s loud music and talking, and hates the handdriers. Where possible we try and use the accessible/disabled toilet.

We also have a sequence board for getting dressed. This shows the items of clothing and order to put them on. It keeps him focus on the task rather than running around the house with just one sock and pants ones. It cuts down the amount of time with physical contact (J prefers contact to be on his terms) and means the transition into clothes is less stressful so less risk of meltdown or upset. It has had the added bonus of encouraging J to dress himself. He will pick up the correct item and attempts to put it on himself.

I am a big believer in children knowing their boundaries. For children with autism and other neurological conditions it gives them a firm line of what is and isn’t acceptable. It offers security and predictability. By having this as a visual it enables the children to see the expectation and often they will understand this far more than someone telling them ‘don’t run’ ( where they’re more likely to focus on the word ‘run’) or ‘you must walk indoors’ (where they may have stopped listening after the second word-especially if they are already upset or in a sensory meltdown). Written ruleboards are great for literacy, but of no use to children who are unable to read as it relies again on listening to an adult reading them outloud. 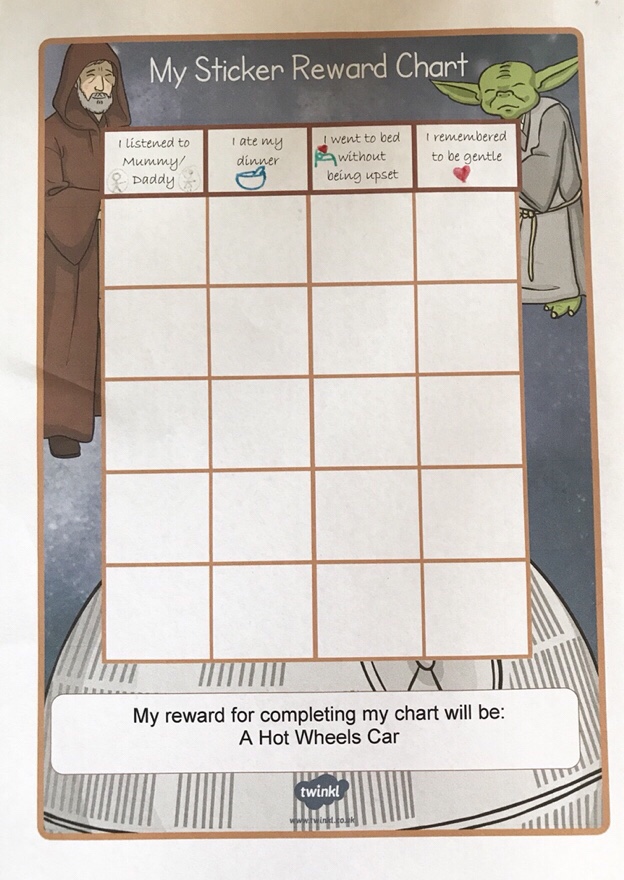 We have two systems at home. One is a reward chart which we used when J’s behaviour was particularly challenging. It showed J what was expected of him. We used the positive, what we did want J to do eg: ‘be friendly to the cat’, ‘eat your dinner’. Once J was familiar and had completed his reward chart, the rules stayed up as a general reminder. The second is a transportable strip which is used to reinforce what behaviour was unacceptable eg: when J bites me, I show him the ‘no biting’ card. Once he has calmed down and his sensory sensitivity has regulated I can then show him the positive ruleboard to remind him of what is expected.

Now and Next System/Work Station

This is a basic system using either ‘now and next’ or ‘now, next, after/last’ (you can add more as the child’s understanding and attention increases). This is used when you need the child to follow something that is more adult chosen/adult directed. J has used this system since he was 2. It was started by his speech therapist as a way to encourage J to participate in the activities she needed him to do. We followed it at home too, starting at ‘now and next’ level so one symbol would be the activity I wanted him to do, then a picture of something I know he likes. As he become more compliant I would have two activities I wanted him to do, then say he could go play.

This then extended to three, sometimes four activities. We use this system when wanting to develop an area such as developing PECs, building fine manipulative skills, encouraging play skills away from the usual Star Wars games etc. At Nursery and Speech Therapy this in done at a specific work station, away from distractions where J has build up the routine of knowing that this is for adult directed activities. At home, we tend to do the activities wherever suits us as we have the advantage of being 1:1.

I know that many people have asked whether having the visuals means that children are less likely to try and communicate verbally. I cannot speak for all children and all families but in my time as an early years professional I found that the visual actually encouraged children to speak as the pressure to be understood verbally is gone. They become more confident to speak and then develop on from that. For those who are not able to speak yet, and there is a possibility it may not happen then the visuals become their voice, and gives them a level of independence to get a meaning across. It can also help greatly with behavioural needs, as children have a way to express themselves so are less likely to lash out or become so upset. As a mother I can say that it is beyond valuable for our family. J’s speech came on so fast once he was able to model his communication on the visual. He followed routines and dealt with transition a lot easier and is now confident in removing the symbols from the now and next board, and visual timetable to reflect which activities are finished and tell me what’s next (for example, almost pushing our wonderful specialist nursery nurse out the door when she said it was time to do, as he knew ASDA was next on the timetable and he was eager to buy his favourite doughnuts, haha).