J has never been a great sleeper. He never slept through as a baby, or a toddler or a preschooler. However we had a routine and bedroom environment going that was minimizing issues. Although J would wake ups he had visuals that reminded him not to get up and to go back to sleep or to play in his bed.

Lately this has started to fail. He uses every tactic he has from needing toilet for 100th time to being scared of something random, once it was because of his finger!Sometimes he wants me to go into his bed and sometimes he wants to come into ours. This would be fine except he still doesn’t sleep even then. He’ll want to chat or to know why he can’t put Cbeebies on at 3am.

It’s gotten to the point where it takes a while for him to go to sleep in the first place, and then from anytime 1am onwards he’ll wake up on and off constantly till the Gro clock is yellow and he announces the day has started.

This has started to affect his behaviour during the day too. By the afternoon he is tired and grouchy. He’s answering back, stumbling more and just plain moody. So I need to get him back into staying in bed and going back to sleep. 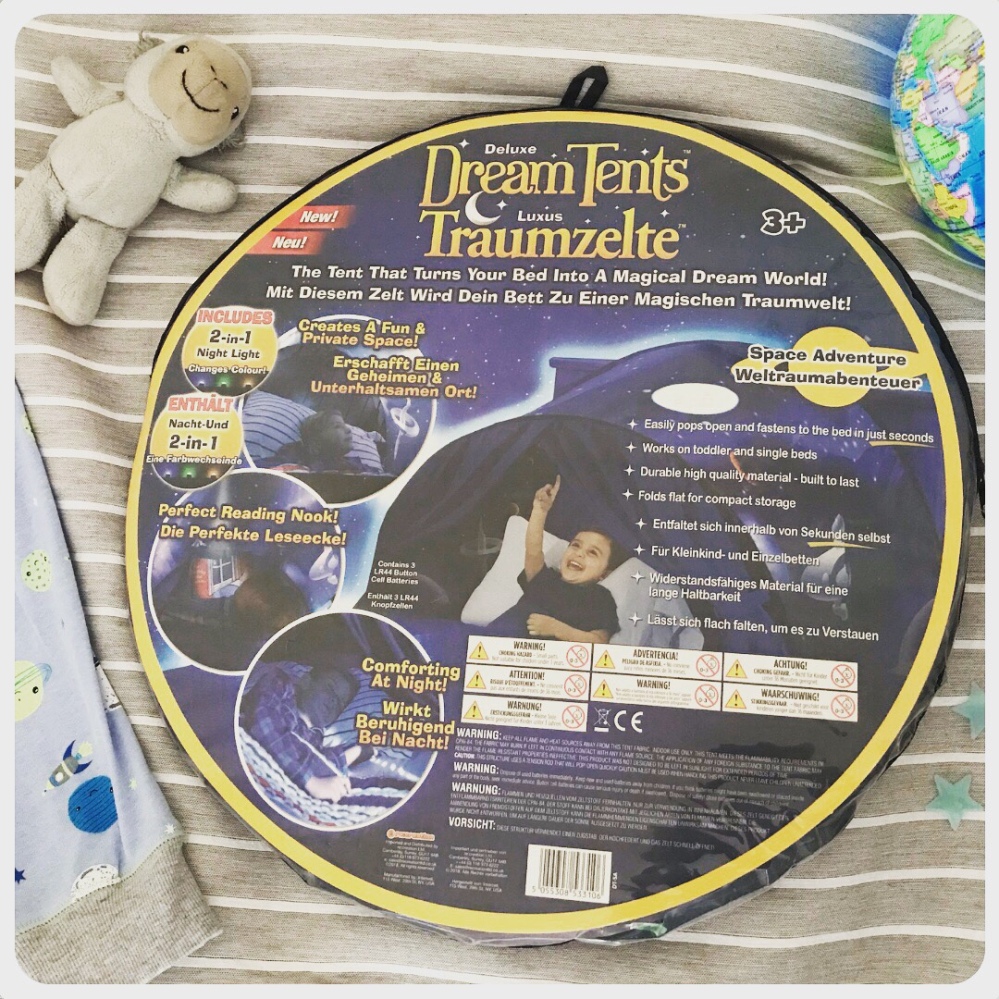 This is where the Dream Tent from Smiths Toy Store comes in (Not an ad, just incase you wondered where we brought it from). Thankfully it arrived yesterday and I was able to get it up by the time J came back from SEN nursery. It’s a pop up ‘tent’ which goes over the bed to create an enclosed space. In theory it’s perfect for J as he has always loved being enveloped and enclosed in things. He’s happiest under a table or in a box or den. He likes to be wrapped in a blanket.

The fact it’s a tent means he can’t see out of it either which means the dark, the apparently ‘scary shadows’ etc aren’t visible now. He can’t see the room so he doesn’t have to worry about what’s going on in it. He can have his lullaby bee light on still and in fact the projection is even stronger as it’s closer than the ceiling so that is another sensory aid to relax him and provide a way to calm him. The tent comes with a little light too. It has different colours and is easy to clip on and use.

The tent was simple enough to put up. There are a couple of small things that were a bit of a let down. Firstly the tent is rather ‘loose’. It ‘dips’ easily which does worry me a bit plus it makes it look less sturdy. I ended up attaching it to the wall just to make it more secure and ‘stretch it out’ more.

Also, when I put it the way I was instructed, with the little ‘doors’ it fell forward more and once quilt was in it made lots of ‘rustling’ noise which I know would bother J, so I put it on backwards instead. Looks great and stayed up better. Plus I can see him easier when I go to check on him rather than rustling the doors open. 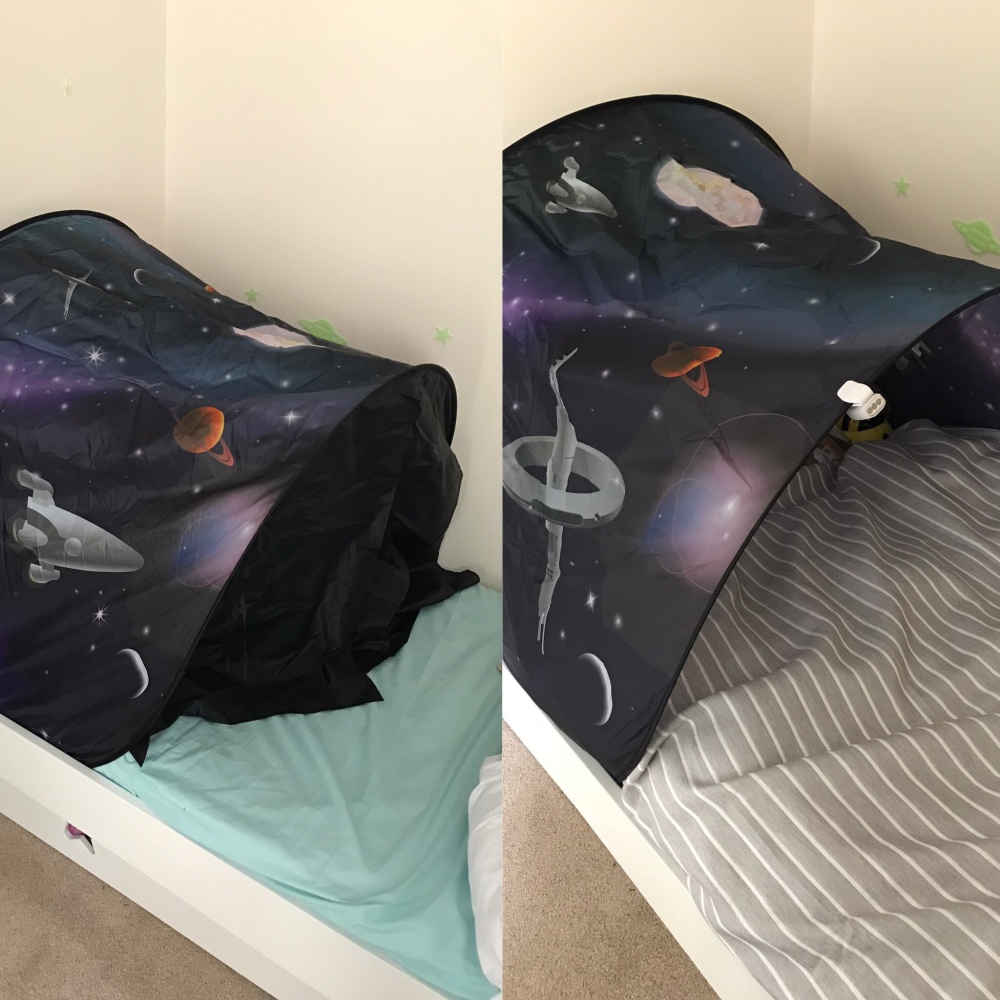 Apart from that I think it’s great. It’s got a lovely design on it which goes brilliantly with J’s bedroom. J was so excited to see it and climbed in it as soon as he got home with a huge smile.

J was really enthusiastic and didn’t need half as much prompting to get into bed. He snuggled down straight away with a very excited look on his face. He put the lights on and cuddled his special “Lamby”.

Do you know what? I had a bath…a whole bath where I didn’t hear Daddy having to come up the stairs, or little patter of feet getting out of bed, or having my bath interrupted by J needing a wee (which would then result in him trying to add bath toys and needing a ‘chat’).

The big question…did he wake up?

J woke up once at 4am. He called out to me to say the light was off and he wanted it back on. He put the sensory lights back on and he went back to sleep. Next time I heard from him was 7am as he needed the toilet and again went straight back into the tent. I could hear that he didn’t go back to sleep but he was playing with the toys and books on his bed so he was safe and happy. At 7.30am he then announced his gro-clock had turned yellow and he came into my bed to put Cbeebies on whilst Mummy and Daddy gets sorted (he unclipped the tents light and brought it with him, haha).

Maybe it’s coincidence, maybe it’s the fact he’s had so many awful nights and he’s just crashed out or maybe the sensory affect has worked. I’m going to remain positive and make sure I praise J for staying in bed and sleeping. This could be a turning point for us. We’ll have to wait and see.

I’d love to know your views. Have you used a sensory tent? Do you have any other sleep tips? Let me know in the comments or find us on Facebook, Instagram and Twitter.

UPDATE: Well the tent will definitely be staying. For two nights J slept through till 6am which was amazing. But the last couple of nights he has woken up once around 1-3am…however he hasn’t got out of the tent, he’s simply shouted out to me, puts his lights back on and eventually goes back to sleep-himself! Then he sleeps again till 6-7am. The only annoying thing is I lay there listening the ‘click click click’ of him pressing the buttons to change colours on his light 🙄 The Tent is amazing!